has retired from international touring
but shares her rare traditional folktales in English
through publications edited by Fran.

Read a review of past performances in America

Mrs. Fujita tells country tales she learned in childhood from farmers and village elders while she was growing up in rural, mountainous Fukushima Prefecture. When she performed in America, professional storyteller Fran Stallings introduced each tale with a brief English synopsis; then Fujita-san told in the traditional manner, with lively gestures and facial expressions -- in Fukushima dialect Japanese! LANGUAGE WAS NO BARRIER. Even preschool children followed these tales with ease.

Drawing on her large repertory and wide experience with all ages, Fujita-san tailored each concert to the appropriate developmental and interest level of the audience. She enriched her programs with traditional children’s songs and old-time games (comparable to jacks, marbles). Where time and place allowed, audience members were invited to try their skill. These interactive programs delighted audiences of all ages at American festivals, conferences, schools and libraries.

After twelve spring tours reaching twenty-one states, Fujita-san decided that she is "too old" for this kind of travel. She now confines her telling tours to Japan, where she keeps a very busy schedule and is much in demand to teach and tell, especially in tsunami-ravaged Fukushima Prefecture. But American fans will never forget her warmth, humor, and sincerity. She truly opened a door to international understanding for a generation of American children, 1995-2008. 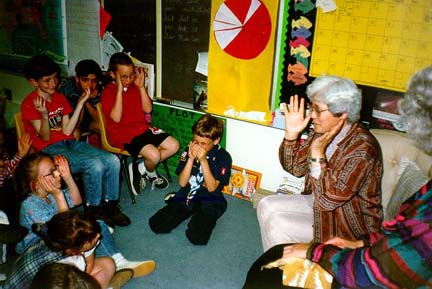 General information
Mrs. Hiroko Fujita grew up in mountainous rural Fukushima Prefecture, Japan, hearing traditional country tales from the village elders: animal fables, comic adventures, and stories of family life in old times. Following a university education, she worked for forty years as a kindergarten teacher and primary grade librarian in Fukushima and in Kashiwa City just east of Tokyo. Now she is much in demand to visit schools and libraries throughout Japan, where her storytelling keeps the old tales and games alive for the videogame generation. She also speaks to older students and parents’ groups about the importance of the old stories and games in preserving cultural roots, reinforcing bonds between generations, and laying groundwork for literacy. She is a master teacher, involved in training younger colleagues.

Her first tour of the United States, in 1995, resulted in triumphant annual returns in 1996 - 2004, and 2006 and 2008. During her visits to California, Arizona, Utah, New Mexico, Kansas, Oklahoma, Texas, Missouri, Arkansas, Mississippi, Alabama, Michigan, Illinois, Indiana, Ohio, Kentucky, Massachusetts, New York, New Jersey, Virginia, and Washington DC, she has addressed groups ranging from a handful of preschoolers to 300 adults -- children, educators, librarians, business executives and college students. She has led workshops and hands-on sessions with folks of all ages, as well as performing at festivals and banquets. Her poise and humor are never-failing. Children and adults alike are drawn to her warmth.

Fujita-san's interpreter and native guide, Oklahoma-based Fran Stallings has worked as a professional storyteller since 1982, performing and teaching nationwide. Fran met Fujita-san in 1993 and accompanied her on the U.S. tours. They have also done seven storytelling/book-signing tours of Japan featuring Fran’s stories. Three bilingual books of Fran’s world tales, edited by Fujita-san (see above), have been published in Japan. In November 2005 they were featured at the Asian Congress of Storytellers in Singapore. 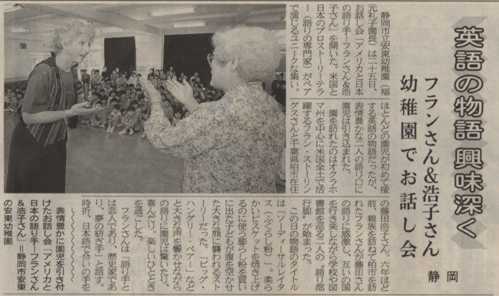